A Socratic Explanation for Daft People (or "FAQ" as  they say)

LECTOR: What are you on about?

LECTOR: I don't believe you. Explain.

AUCTOR: (heaving a great sigh) The essentials are these... it's a party, where men get together and eat and drink and be merry and read poetry and sing songs and toast and ...

LECTOR: Can I come?

AUCTOR: You aren't Lectora, so yes.

LECTOR: I don't even know what that means...

AUCTOR: Look, here's what you need to know: 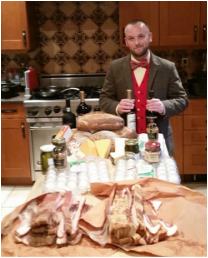 LECTOR: Will there be food?

AUCTOR: And how!
LECTOR: How much? because that sounds awesome...

AUCTOR: Well, yes. But you should donate some money to help pay for the beer and wine. That stuff isn't free.
LECTOR: You contradict yourself.

LECTOR: Anything else I should know?

AUCTOR: Yes...
LECTOR: Zounds, I think I shall attend.
AUCTOR: Of course you shall. And finally, as the Feast in the book occurs on the Eve of All Souls (November 1st on the Church calendar), and this year's feast occurs near that auspicious Solemnity, you should know that it shall be part of the spirit of our gathering in the dying of the year to drink to those many merry men who've walked our road before us, whose wisdom guides us along our own way, who stand us guard, and who wait ready to greet us manfully one day at the Inn at the End of the World. And so, therefore, in the hopes of seeing you at this preview event for that Great Feast, I leave you with this:
They that have been besides us all the day
Rise up; for they are summoned to the gate.
Nor turn the head but take a downward way;
Depart, and leave their households desolate.
But you shall not depart, although you leave
My house for conversation with your peers.
Your admirable Ghost shall not receive
Mere recollected vows and secret tears.
But on that brink of Heaven where lingering stand
The still-remembered spirits hearkening down,
Go, tower among them all, to hear the land,
To hear the land alive with your renown.
Nor strength, nor peace, nor laughter could I give
But this great wages: after death, to live.

- Hilaire Belloc
OMNES: Amen.
Back to "About" Overview